U.S. consumers have been drinking fewer purchase beverages for the past ten years, but when they do, they tend to drink coffee, soft drinks, milk, iced tea, or bottled water. According to the NPD Group, there are 72 fewer occasions per person each year when the average consumer purchased beverages compared to a decade ago. Even with a decline in beverage purchases, the beverage industry is becoming increasingly diverse!

Brewed coffee and specialty coffee are the top consumed beverage at home in the U.S. followed by regular and diet soft drinks. Milk and iced tea rank as the third top beverage consumed in and out of homes. Although the consumption of regular and soft drinks have been on declined, carbonated beverages are still one of the highest sold beverages in the U.S. and this category is predicted to grow by 6% in the next few years. Carbonated beverages are the second most consumed beverages in the U.S. at home which can be seen in the fact that they represent such a large portion of shelf space at grocery stores.

Bottled water is a top growing beverage category in and away from home. This is the only category that has seen a large increase in consumption at home in the past decade. Companies continue to introduce new varieties of water to attract consumers looking for a low calorie and sugar drink. According to a report from Beverage Marketing, bottled water consumption grew 120% between 2000 and 2015. During this time, carbonated beverages have decreased by 16% due to health concerns. Bottled water has become an alternative for juice, tap water, soda, and alcoholic drinks.

Major beverage companies such a Coca-Cola and PepsiCo have been expanding their profiles to include a wider variety of beverages including various bottled waters. Although consumers are purchasing fewer beverages than in the past, beverages are still a very important part of the American diet! 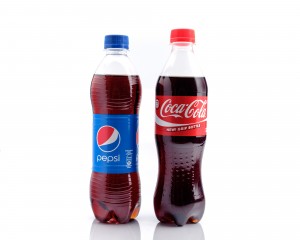