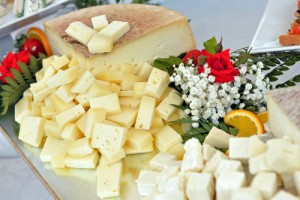 Milk consumption has been declining in the U.S. during the past few decades, but sales in cheese have been steadily increasing! With more drink options (juice, flavored waters, sodas, sport drinks, etc.), people have been consuming less milk, but cows are producing more milk than ever.

Bloomberg stated that over the past two years, Americans are eating cheese and butter at the highest rate since 2000. This sales surge is helping to make up for the decline in milk consumption. It is not clear what’s driving the increase in cheese consumption, but this one particular food may have something to do with it: pizza! According to CNBC, there are about 70,000 pizzerias in the U.S. contributing to a growing $45 billion industry. Although pizza is a popular meal, the U.S. cheese surplus is not a result of consumer habits.

BloomgergMarkets stated that Americans are eating 35 pounds of cheese each annually, which is twice the amount consumed in 1980. The dairy industry has more than a billion pounds of cheese worth $150 million in freezers because the global market for cheese is saturated. With increased milk production in other countries and a strong U.S. dollar, American dairymen are facing difficulties selling cheese even with higher consumption.

Cheese is a staple for most households and consumption rates are likely to continue to increase. Be sure to let us know what your favorite kind of cheese is in the comments!