Candy has become an everyday treat readily accessible everywhere from checkout lines at the grocery store to vending machines at work so we’ve got a few fun facts listed below that you can share with your friends on November 4 for #NationalCandyDay!

The first form of candy to make its way to America was rock candy. As one of the simplest types of candy, it was a luxury only the wealthy could afford. The first American vending machine was introduced in 1888 and dispensed Tutti Fruity Gum, but that wasn’t even the beginning of America’s love affair with candy.

Chocolate started in 1847 in Britain when Joseph Fry and his son mixed cocoa powder and sugar to make a candy bar. After the idea traveled across the ocean in 1875, Henry Nestle decided to add milk to the concoction, making the chocolate taste less bitter. From there Milton Hershey had his eyes on chocolate-making machines he found at the Chicago World’s Fair. After already making caramel, he couldn’t resist the opportunity and one year later, the world got the first chocolate bar from Hershey.

After that, chocolate bars took off as a special treat! Starting with the Clark bar in 1916, Oh Henry! Bar in 1920, Reese’s Peanut Butter Cups in 1922, and Baby Ruth and Milky Way in 1923. With more and more chocolate delights being added to the industry, it makes sense why the United States consumes roughly $18.27 billion dollars’ worth a year.

We’ve got even more fun candy facts listed below! Be sure to tell us your favorite candy by leaving a comment or reach out to us on our Twitter and Facebook. 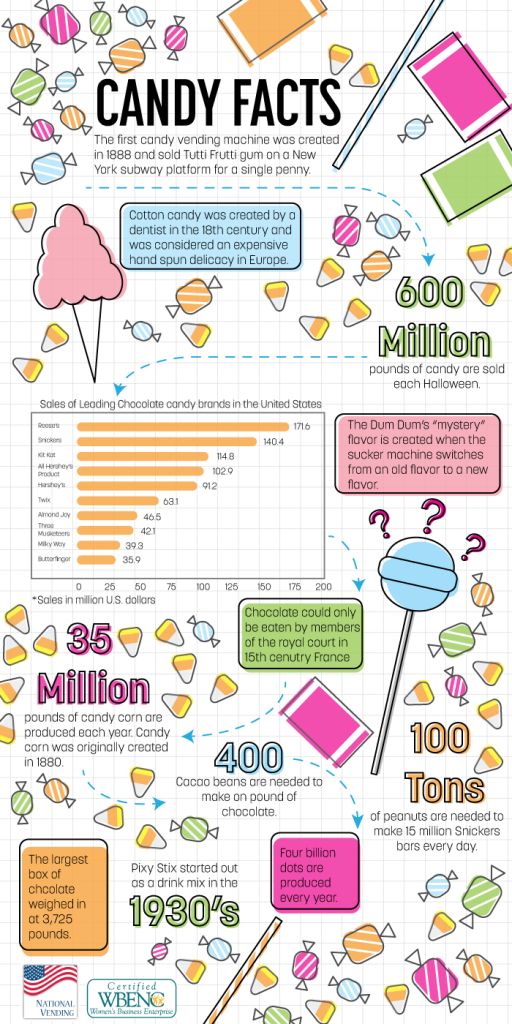